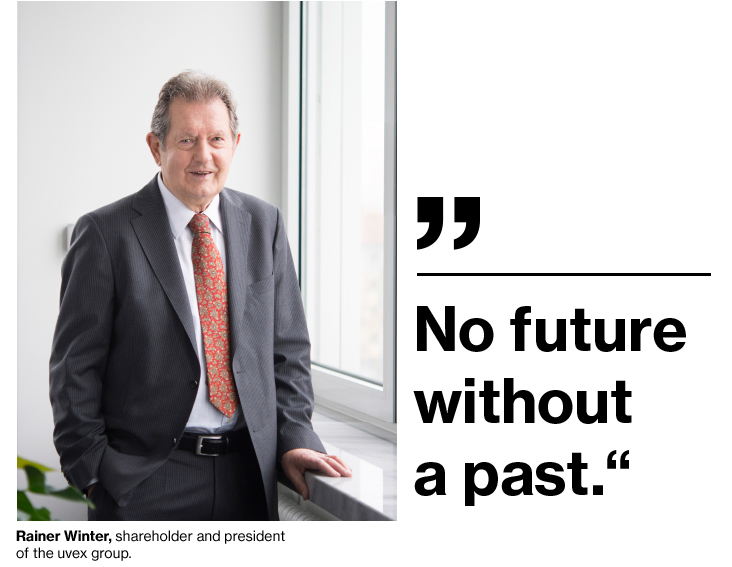 It is only by being aware of our past that we can successfully shape our future.

We can proudly say that uvex is one of the major brands to have helped write the industry’s history, not only in Germany, but also the entire world.

the history of safety

The first safety eyewear created by Philipp M. Winter was designed for labourers. They protected the eyes from metal fragments and sparks, when drilling, machining or welding, for example.

the history of sports

Skiers, motorcyclists and mountaineers trusted in our high-quality products long before the term “sports marketing” was invented.

In 2014, our first-class products for sports ranges from innovative ski goggles to professional racing helmets for cycling, equestrian and winter sports.

It has been a long journey from the company’s humble beginnings in a suburb of Fürth to its present status as a major international group. uvex’s history has been characterised by difficult times, by long years of war and economic depression, but also by dynamic years of development and other highly successful periods.

The oft-quoted maxim “think global, act local” has been our guiding principle and embodied our aims since long before words such as “globalisation” and “global player” emerged as mainstream concepts.

Philipp M. Winter, born in Fürth im Wald on 3 May 1898, attended Fürth High School in Bavaria. After the First World War, he started his career as an export businessman, concentrating on Portugal and Spain.
After establishing a small distribution company in Barcelona, he returned to Fürth, Bavaria, and founded the “Optische-Industrie-Anstalt Philipp M. Winter”, which was a handcraft-oriented establishment in Fürth/Poppenreuth.

Ski goggles already featured ventilation, but this simply comprised holes punched in the sides. The plastic lenses sewn together by hand and strip of soft fabric attached over seams to smooth the edges.

uvex products at the Olympic Games

Philipp M. Winter equipped a number of athletes with safety eyewear at the 1936 Summer Olympics. After successfully mastering the challenges of the early years, the premises soon became too small and the company moved to Salzstrasse in Fürth, which remained the headquarters for many years.

A pioneering spirit, ingenuity and dedication helped uvex through the trying war and post-war years. It marked the beginning of a targeted, market-oriented business structure.

The uvex brand is born

The company under the sole proprietorship of Philipp M. Winter is renamed “Winter-Gesellschaft für Optik und Augenschutz” with the family becoming legal shareholders. Rainer Winter is appointed as joint Managing Director together with Philipp M. Winter.

Rainer Winter coined the “uvex” brand name, based on an abbreviation of the quality seal for lenses – Ultra Violet EXluded. From this moment on, all sports and leisure products were and still are sold under the uvex brand.
uvex champion: first antifog ski goggles
In 1967, the uvex group started selling stylish sunglasses to retail under the Filtral brand.

Onset of the most successful growth years

Diversification and internationalisation are driven forward by the new management team.
uvex successfully made the leap across the Atlantic to North America and established manufacturing and distribution facilities in Canada and the USA.
1972 - uvex downhill: the first ski goggles with a spherical, injection-moulded lens and anti-fog coating.
Range expanded to include footwear.
1976 - Rosi Mittermaier won two gold medals at the Winter Olympics in Innsbruck, Austria

In 1980, the subsidiary Alpina is founded in Derching, Bavaria.
1985 – Alpina Ski & Surf shield eyewear launched (later SWING), which then became the top-selling Alpina sports spectacles in the world.
1986 – Profas GmbH was established; today operating as uvex safety gloves.
Many top athletes place their trust in the uvex brand!

The first manufactured helmets were introduced in Germany in 1987/88.

Airtech cycling helmet: very lightweight and extremely safe due to EPS and ABS materials, a unique combination on the market.
One of the first uvex ski helmet models
In 1987, laservision was founded as a joint venture and has been wholly-owned by the uvex safety group since 2004. The company has achieved global success with technologically advanced laser protection products.
Gabriele Grau, daughter of Rainer Winter, joins her father's company in 1981. Now two generations are active there.
Michael Winter joined the company in 1987 as Junior Product Manager Motorsport for the uvex sports group. In 1995, he took over the management of uvex sports in the two-wheeler sector (motorsport and cycling).

In 1994, the GmbH was split into four market-oriented divisions to establish a group structure that is fit for the future. UVEX WINTER HOLDING GmbH & Co. KG assumes overall control of the Group

In 2001, uvex acquired the product specialist Heckel, which still operates as an independent brand.

The uvex academy was founded as the first privately managed training centre in the field of occupational safety and personal protection equipment (PPE).

German sites continued to grow, with the expansion of the manufacturing plants in Obernzell (BSA) and Lederdorn in the Bavarian Forest.
uvex safety group selected as one of the TOP 100 for being among the most innovative companies in Germany.
Expansion of the production plant of uvex sports in Nyrsko, Czech Republic, doubled the manufacturing capacity.

Introduction of many new innovations at both uvex safety and uvex sports, including uvex variotronic, uvex take off ski goggles, uvex pheos spectacles and helmet, uvex phynomic safety gloves and many more.

uvex Core Range Bike: launched a range of products for the freeride community.

uvex i-3: the latest injection-moulding technology combines three materials to create a spectacle frame that is totally metal free which adjusts for any face shape.

Focus on safety and sustainability

uvex plus: launch of one of the lightest hard shell ski helmets.
uvex texpergo Collection 26 launched, featuring a sporty design that is sustainable and functional
uvex opens its own production facility, the UVEX Safety Equipment (Kunsshan) Co., Ltd near Shanghai in China to better serve the Chinese and South East Asian markets with safety spectacles.

Most successful Winter Olympics ever in Sochi for uvex: 62 medals and 450 athletes, including Felix Neureuther, Marlies Schild, Felix Loch and Anna Schaffelhuber for Alpina.

uvex receives “Top national employer 2014” award.
Diversification on the equestrian market: uvex sports takes over the Schwenkel brand in 2014 and offers now also equestrian gloves.
The success story of uvex safety gloves continues internationally. This required an additional extension to the plant at Lüneburg for a double-digit million euro sum, the biggest investment in the history of uvex.

Segment expansion in the uvex safety group: With uvex handwerk - profisystem metall uvex safety has developed a complete product system which is specially tailored to the requirements of the metalwork industry.
The safety shoe uvex 1 x-tended support 8512 is awarded with the „German Design Award 2015“, following the “Red Dot Product Design Award 2013”, the “Focus Open 2013” in Silver and a nomination for the “Design Award of the Federal Republic of Germany 2014”
The octo+ technology is the first fully automatic fit system for helmets. Thanks to the new variotronic® technology the uvex snowstrike has the perfect lens for every light conditions - automatic or manual.
Rainer Winter celebrates his 60th company anniversary.

Big birthday for the uvex group

90 years of protecting people.
In line with this philosophy, the family-owned company based in Fürth has been synonymous with the best-possible protection for sports, leisure and the workplace for 90 years.
The new reception area at uvex headquarters is to be opened in November. Primetta, the sunglasses specialist, is the newest member of the uvex brand family. uvex receives the “Brand of the Century” award.
uvex safety group acquires a holding in the American company HexArmor®. This strategic investment marks the return of uvex’s personal protective equipment to the U.S. market after an absence of 20 years.
The uvex group is one of the best employers in Germany in 2017!

Look for a winner - 3 ski helmets and goggles, specially developed for and worn by the Creme de la Creme of Alpine Ski Racing at Olympia 2018 in Pyeongchang. 277 international uvex athletes compete at the Winter Olympics and win 11 gold, 10 silver and 12 bronze medals.
uvex safety gloves - the ultra-modern machine park of uvex safety gloves in Lueneburg is growing!
In 12 months of planning and construction, the 80 ton production plant has been installed on an area of 330 m².
The uvex safety group is exhibiting for the first time at bauma, the world's leading trade fair for construction machinery, in Munich. With its construction product system, the uvex safety group offers a wide range of products for all trades within the construction sector.
In February 2019, the building of the BSA Obernzell site was officially put into operation in order to ensure more flexibility and speed in production.

On 19, June 1969 Rainer Winter founded the plant, where initially ten employees and ten home workers started manufacturing ski, motorcycle and diving goggles. Today the production site with 120 employees is specialized in the production of ski goggles, ski and riding helmets as well as safety glasses and helmets.
The year 2020 is overshadowed by the Coronavirus. But even in this crisis, the uvex group is living up to its guiding principle protecting peoples.
Founded in 1980, the Rainer Winter Foundation based in Fürth celebrates 2020 its 40th anniversary.
In honor of the 85th birthday of Rainer Winter the city of Fürth dedicates a street to him, the Rainer Winter Straße.
The uvex group acquires a majority stake in the US company HexArmor®.
Protecting People GmbH was founded as the fourth subgroup and is responsible for the uvex group B2C brand store as a sales company.